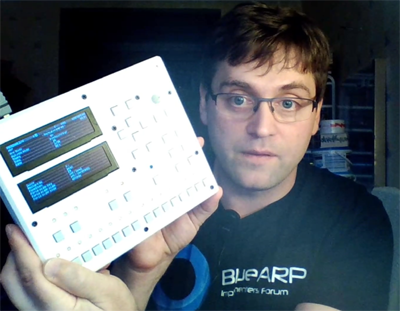 Oleg has been passionate about electronic music and technology since his teens. He built his first ‘synth’ in 90’s: not having the money to get an audio card, he soldered a simple audio interface attached to the LPT port of 486DX PC (something like Covox Speech Thing, as it turned out later) and wrote an application in turbo pascal which allowed him to play notes polyphonically from a computer keyboard. Some other day he soldered a simple ‘drum machine’ based on multi-vibrator circuit, which produced a repeating kick sound with adjustable tempo.

Later he tried to lay his hands on all pieces of the music technology he could afford – arrangers, drum machines, VA synths and lots of soft-synths as well.

He started BlueARP project somewhere in 2011, as a pursuit to build a perfect arpeggiator tool for himself. The first version was released to the public in 2012, it was accepted quite well. Oleg continued to support and improve BlueARP plugin and in 2016 it became quite mature and stable. Around that time the idea to make a hardware implementation of BlueARP came to his mind. 4 years later, in 2020, BlueARP DM units were available for the first beta-testers.

Oleg has a full-time day job in IT to support him financially and BlueARP remains his strongest hobby and a labor of love.

PS. ‘Oleg Mikheev a.k.a Graywolf’ is the way he used to call himself online for years. It abbreviates as ‘O.M.G.’ – funny fact and totally unintentional; this is where the name ‘OMG Instruments’ came from.